Archive | Perkins Engines RSS for this section
May 6, 2016 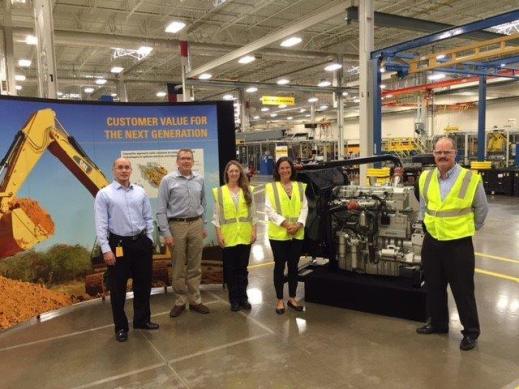 They met with the Product Support team including Michele Curtis and Mark Voorhees, the Sales team including Christopher Perez and Nick Leitze, and Parts Manager, Rob Ekenstam. They also met with Tad Petrie and Ed Renno. The latter two are now assigned to other Territories, but have been a great support in the past for Caribbean Perkins customers and their dealer network.

Tom & Barb were given a factory tour, where Perkins is now assembling the 2000 series engines in the state of the art facility. Although some sub-assemblies such as cylinder heads are made by computers, the engines are still largely assembled by hand. Because each engine is built to the customer’s order, the assembly of engines are continually changing.

Having all their factory staff trained to do multiple jobs allows them to be able to move to different areas of the plant to do different jobs, depending on demand. This not only makes the factory more efficient, changing staff assignments throughout the day keeps them from becoming bored and less prone to making mistakes due to repetitive tasks.

Engines are now tested at various stages of assembly to be sure that everything was assembled correctly and all the components are in working order before it reaches the test cell. Every engine is still hot tested, under load, in the test cell before the final components, ordered by the customer, are installed and the engine is painted. Perkins offers multiple color options to customers, depending on their requests.

The Gerkers learned that the old reliable 1000 series has been discontinued. The 1100 series has been around long enough that its reliability and reputation is well established. Demand for the 1000 series had fallen off so much that there was no reason to keep it in production. The new 1200 series is latest version of the engines that date back to the 4.236 & 6.354 engines first launched in the late 1960’s. They are still built to fit the footprint of the old engines, but are now 1.2 liters per cylinder, resulting in a 4.8 and 7.2-liter engine in the same package that was launched in the 1960’s. The 1300 series engine has now been replaced by the 1500 series engine that is being manufactured in Seguin.

The entire team that met with the Gerkers were committed to Parts & Power’s goal of making Perkins engines the best serviced engine in the Caribbean. Having dealers in every country and on most islands in the Eastern Caribbean means that an engineer is not far away. Not having unreasonable demands put on the dealers to purchase and pay annual license fees for Perkins Electronic Tools, allows them to remain Perkins dealers. Other manufacturers cannot make the same claim. They require such exorbitant costs for training, purchase and licensing of their tools that many dealers in the Caribbean cannot afford to own it. That results in having to fly in technicians from the US, at great cost, every time there is a problem with the competitor’s engines.

They also discussed the upcoming 2016 Hurricane Preparation Campaign that makes it easier and less expensive for Perkins customers to do their Annual Maintenance. 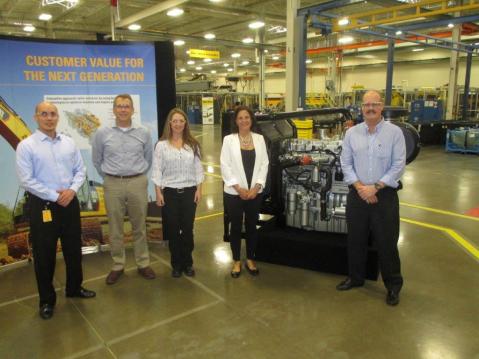 Perkins M92 helps ‘Ganesh’ out of a tight spot!

It was dawn, and we were running dead-down as we approached a small island (one of 17,508) in smoky, mysterious Indonesia. We’d just sailed 3,200 nautical miles and used the engine exactly three hours, mostly to keep it dry and lubbed. Anyhow, I decided to jibe and furl my large genoa jib. Normally, we both do this but the wind was moderate and the sea fairly smooth. Perhaps I was a tad drowsy. In any event, I attempted it by myself. Without Carolyn (who has sense except when it comes to men) I managed to somehow hopelessly wineglass my genoa jib – for the first time ever I was at sea with a partially furled and partially not furled jib. By the time I realized that it was really, really tangled and I wasn’t going to solve the problem by swearing – I was almost on the beach.

I could hear the surf line ahead-not a nice sound.

I cranked up, and, thanks to the extra power and good torque of the Perkins M92B (supplied by Parts & Power), was able to power away from the immediately danger… the windy, wave-crashing beach… even as my entire rig was going berserk from the flogging sail attempting to commit suicide and/or sink my vessel.

I needed a lee and I needed it fast.

Thus I revved our Perkins up to 2200RPM and powered into the lee of the same island, and managed to anchor in 147 feet of water-despite almost hitting a salt water crocodile begging for table scraps in the head with our hook! (Amazingly, we were right in front of an ancient Hindu temple-with, perhaps, Ganesh lending a helping or hurting hand!)

Once the anchor was set, and we were both able to think… Carolyn cleared the problem within ten minutes while muttering, “I married an idiot!”

…the lesson learned was to never send a stupid man to do a good woman’s job!

Unfortunately, we couldn’t leave. Our brand new Rocna anchor and our just regalvanised chain was fouled in 147 feet of water – perhaps by the unhappy croc – I dunno.

My anchor gear costs $2,000, and I certainly didn’t want to leave it there. So I tried every trick in the book-nearly yanking my wife (poor, poor woman) and our anchor windlass right off the foredeck. “BANG!” went our one-inch Nylon snubber… making a sound like a cannon shot as it parted.

Only, perhaps, a grinning croc laughing at us on the bottom.

So I finally allowed almost full scope out and almost full power… and, canting the bow way down with steady pressure and a slightly offset rudder… made a slow giant tug-boat circle… until… POP! And we broke off the tip of the mountain or whatever was fouling us below.

Hooray, again, for Perkins and its massive power!

Do I think I could have saved GANESH and twisted up an underwater mountain with a Yammer or Stammer or some other high-revving engine?

…nobody in their right mind would go up against an ugly salt water crocodile mano-o-mano with one of those pathetic ‘numbers game’ engines!

Thank gosh for my low-RPM, high torque Perkins, and the team who installed it.

PS. Carolyn wants a divorce but I told her we couldn’t afford it.